Lord of All the Dead

"A remarkable act of personal history: brave, revelatory and unflinchingly honest" WILLIAM BOYD "There is no-one writing in English like this: engaged humanity achieving a… 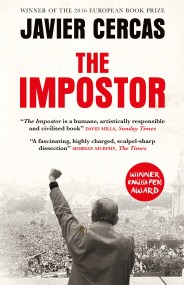 LONGLISTED FOR THE MAN BOOKER INTERNATIONAL 2018 A TRUE STORY THAT IS PACKED WITH FICTION - FICTION CREATED BY ITS MAIN CHARACTER, ENRIC MARCO But…